Since I live in balmy Houston, my Christmas will never be white. If I’m lucky cold enough for a fire but no snow! I love decorating the tree. The theme for my Christmas tree is the piano. Most of the ornaments are crystal baby grands with other instruments added for variety.

Oh Christmas tree, oh Christmas tree. Germans are credited with the advent of the Christmas tree. Christians decorated trees, and some built Christmas pyramids of wood, decorating them with evergreens or candles if wood was scarce. Martin Luther, the 16th century Protestant reformer, added candles to the tree, but as late as the 1840s, Christmas trees were viewed as pagan symbols, not accepted by most Americans.

Before Charles II was restored to the throne of England (one of my favorite subjects!), Oliver Cromwell preached against pagan traditions, including Christmas carols and decorated trees. In 1659, the year before the Restoration, the General Court of Massachusetts banned any observance of December 25 other than a church service. Fines were levied for hanging decorations.

In 1846, the illustrated London News featured a sketch of Queen Victoria and her German Prince, Albert, standing with their children around a Christmas tree. Victoria was a very popular monarch. Anything done at her court was immediately the rage—not only in Britain but in America as well. The Christmas tree had arrived.

What is your favorite Christmas tradition?

Bianca lives in Texas with her baby grand piano and is very fond of her snazzy little convertible. By day, she is a legal assistant, and by night pens tales of love, lust and danger. She has two sons, one of whom lives in England, the other in Texas. She still believes in the power of love—and the power of lust—and enjoys delving into the soul of both the L-Words, bringing to life hot men and the hot women who love them.
Blog: http://biancaswanblog.wordpress.com/
Website: http://biancaswan.com 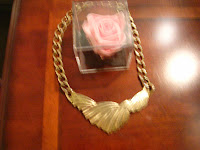 Bianca will give away an angel wing necklace to one lucky commenter.
Posted by Long and Short Reviews at 4:00 AM

I love decorating the tree and I also love Christmas cards.
debby236 at gmail dot com

me i take up to 3 day to do all the decoration i have the tree of card on the wall and have over 250 and more coming and then the trees up and the out side done desi the blonde2msn.com
i love the necklace and would brag is on my face book and here and on twittere site

I love decorating the trees, have a few now, with different themes on each tree, it is nice to pull out the decorations and remember where I got them and what they mean to the family.

Jean, I have a themed tree, too. Thanks Debby and Desi for dropping by and commenting. Best of luck to you all in the drawing. I think you would enjoy the necklace.

My favorite tradition is hanging the stockings and stuffing them with little trinkets. It could be something as simple as socks or some kind of bling- earrings for the girls, maybe a new watch for the guys.

I hope you have a wonderful Christmas and Happy New Year.
Beautiful giveaway!--oh it's the necklace. lol

Merry Christmas to everyone and thanks for stopping by. Karen, I love stocking stuffing, too. Yes, don't we all wish that "darling" angel was the giveaway--but then I think I'd keep him. Jennifer, I hope you get to have a themed tree soon, but I understand. I remember when my boys were young.

thank for hop and love the way you guy give gift way
desi the blonde2msn.com

I love decorating the Christmas tree and then watching the twinkling lights. Always give me a sense of peace. Merry Christmas and Happy Holidays!
Tamsyn
tamsyn5@yahoo.com

Hi everyone! It's Christmas Eve and I hope everyone is having a great holiday season. I think my favorite part of Christmas is listening to carols on my piano (it has a PianoDisc players system). What's your favorite carol?

Beautiful necklace! My favorite Christmas tradition would have to be making toffee and fudge with my family. Thanks so much! Happy Holidays!
-Amber
goodblinknpark@yahoo.com

I love receiving and sending Christmas cards. My husband was in the military and I was once treasurer of a national group, so we get cards and notes from friends we don't really get to see and it is great. I pin them to velvet ribbons and hang them on the wall in our entry. They are so colorful there and I often leave them up into January. I truly enjoy those cards.

I love receiving and sending Christmas cards. My husband was in the military and I was once treasurer of a national group, so we get cards and notes from friends we don't really get to see and it is great. I pin them to velvet ribbons and hang them on the wall in our entry. They are so colorful there and I often leave them up into January. I truly enjoy those cards.

I'm with Gladys--I love sharing Christmas greetings and getting caught up with friends and family when sometimes it's easy to lose touch the rest of the year :)

Hoping your celebrating's been merry and memorable, Bianca!

So many lovely traditions! I'll announce the winner tomorrow in a comment and on my blog. Thanks everyone for participating!

Well tomorrow is the last day of the year. I hope that next year is better. I would have to say that my favorite Christmas tradition is when I go to my grandmothers house and eat dinner.
amberpreer(at)yahoo(dot)com

In a fair drawing conducted by R. Christoper Goldsmith, J.D., Debby is the winner of the necklace.

Thank you all for visiting and Happy New Year.