Can you tell us more about “Under the Southern Cross” which is included in “Cowboy Lust”?

“Under the Southern Cross” is the story of an American who inadvertently witnesses a drug deal gone wrong. The FBI send her to a cattle station in Western Australia to keep her safe until the trial. However Sam, our heroine, isn’t going to cower away and keep out of trouble. She sets her sights on Jake, a Jackaroo who is working at the station for a few weeks. Jake could be just the person to keep Sam entertained!

Where did the idea come from?

This particular story has been simmering for a long time. About fifteen years ago, I was living in Arizona. My partner and I love the backcountry and the desert, so we’d spend most of our weekends following tracks across the Sonoran desert that were barely more than two wheel ruts, and camping under a spread of stars. We’d also stop in every tiny halfway to nowhere town we came across.

There was one such place that was a crossroads on a quiet highway: a few houses and a bar. It was hot, we were thirsty, so of course we went in. The bar was shadowy and deserted, the sort of place that sees few travelers and only a few hardy locals. We were the only customers, so we sat at the bar with our cold Coronas and chatted to the barkeep.

When she heard our Australian accents, she asked if we knew the outback of Western Australia. Well, yes, we replied, some of it, as outback WA is a large and nebulous place, with no fixed boundaries, dry, deserted, and starkly beautiful.

I was there, said the barkeep, and told us a tale, tall and fabulous, involving the witness protection program in the US, an outback sheep station, and her presence there as a “cook” until the FBI recalled her to Arizona.

To be honest, I took her tale with a sack of salt. Would anyone who was presumably still living with a new identity blurt out the tale to two strangers in a desert bar? Probably not, but it was a good story.

Who has inspired you as an author?

I’ve kept going since then.

Do you have any “must haves” with you while you’re writing?

How do you remember ideas that come to you at odd times?

I own a Hewlett Packard Jornada 720. It’s about 12 years old and obsolete technology, but it works for me. Its 6” x 4” full keyboard takes a bit of getting used to (at first it was like typing on a matchbox with a bunch of bananas) but I love it. I carry it everywhere because it’s so handy and I can whip it out to make notes.

What are some of your favorite books? Who are you reading now?

I’m very omnivorous when it comes to books. By the bed right now, I have “How to Live Safely in a Science Fictional Universe” by Charles Yu. In my bag I have “There But For The” by Ali Smith, and on the computer I have “Safe Haven” by Shanna Germain.

What's next for you?

I have two stories in “Girl Fever: 69 Stories of Sudden Sex for Lesbians” edited by Sacchi Green which has just been released by Cleis Press. Then I have a story, “Run, Jo, Run” in the upcoming “Girls Who Score” an anthology of lesbian sports stories edited by Ily Goyanes.

Where can you be found online?

About the author:  Cheyenne Blue has lived in the United States, Ireland, the UK, and Switzerland, but she still calls Australia home and her writing often reflects this. Her erotica has appeared in over 70 anthologies, including Best Women's Erotica, Mammoth Best New Erotica, Lesbian Cowboys and With This Ring, I Thee Bed. She currently lives in Queensland, Australia. Visit her website at http://www.cheyenneblue.com 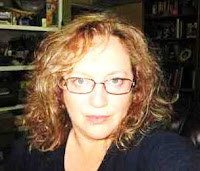 There's a reason Western romance novels never go out of fashion. The cowboy is an iconic figure embodying the dichotomy of the fiercely independent, earthy alpha male crossed with the male as a nurturer and protector. Cowboys take care of their women in every possible way. Wild and wayward women are gentled by the scent of horse and cow and the sight of sun-kissed skin, the feel of work-hardened thighs and arms, and the sound of a deep-voiced Texas drawl.

Contributors at the top of the Western romance genre, including Charlene Teglia, Randi Alexander, Cat Johnson, and editor, Delilah Devlin, have corralled strong and memorable characters ranging from ranch hands to cattle barons, to a rodeo star and a feisty female gunslinger. Traversing romantic settings from Montana, Texas, California, Mexico, and the Outback of Australia, the stories in Cowboy Lust are risky and risqué, full of studs in spurs hot enough to send you to a vacation on a dude ranch!

Posted by Long and Short Reviews at 4:00 AM

Congrats on the new release. This book sounds fantastic. Can't wait to tread it.
I like that your "must have" while writing is red wine. Maybe it makes the words flow easier, or maybe the wine flows easier.

Thanks, Joanne. Red wine is indeed my 'must have', which is why I do most of my writing in the evenings.

Thanks, Joanne. Red wine is indeed my 'must have', which is why I do most of my writing in the evenings.

So many great authors in this anthology.Under the Southern Cross sounds really good.Great interview.
elaing8(at)netscape(dot)net

I have always wanted to visit the outback.
Debby236 at gmail dot com

Hey there!
I'm here to announce a winner!