Fourth and Goal by Jami Davenport

Are You Ready for Some Football?

Okay, so it’s the wrong season for football. In fact, this year because of contract issues, it’s possible there won’t be a football season. But I’m hoping you’ll get in the mood for some football after you read my latest release, Fourth and Goal.

According to statistics, 45 percent of NFL football fans are women. Even though big publishers claim football romances don’t sell, I believe there’s a niche for a football romances, especially ones in which the actual football isn’t just a background prop.

Keeping this in mind, I wrote a different kind of football hero romance, one in which the heroine loves football and is as knowledgeable as most men. My hero is a struggling football player, attempting to get his game back. The story not only follows the romance between hero and heroine, it also follows the team’s ascent from basement-dwellers to championship contenders.

I love football, and I thought I knew quite a bit until I started researching for this book. For starters, I attended the Seattle Seahawks Football 101 workshop. As a result, I toured the Seahawks training facility, listened to players and their wives talk about life in the NFL, and participated in some of the same drills the players use to hone their timing and reflexes. This workshop was entertaining and informative. Not to mention, I loved the goodie bags and raffles. The attendees met current players and their wives, former players, the head coach, and the TV personalities who do game commentary. Almost all NFL teams sponsor a Football 101 clinic in October to benefit breast cancer awareness. I highly recommend attending one of these workshops if you get a chance.

While most of my research wasn’t as fun as the Football 101 workshop, I enjoyed writing Fourth and Goal. I fell in love with my own characters, and they became as familiar to me as dear friends. Here’s a blurb:

BLURB:
In a game played on and off the field, only one of them will emerge the winner.

Armed with an uncanny ability for evaluating football talent, a dogged determination to succeed in a man’s world, and an empty bank account, Rachel McCormick agrees to help struggling wide receiver Derek Ramsey get his game back. Rachel believes Derek, her former best friend and lover, knows the truth behind a points-shaving scandal which ruined her father. She vows to expose the secret even if it destroys Derek in the process.

When Derek’s coach suggests sex as an excellent tension reliever the night before a game, Rachel takes one for the team. The next day, Derek has the best performance of his not-so lustrous pro football career. As Derek and Rachel rack up nights in bed and other places, the team racks up wins on the field. Rachel is torn between her loyalty to her father and her growing affection for Derek. Now it’s fourth and goal, one second left on the clock. Their hearts are on the line. Do they trust each other enough to go for the long bomb or do they get dropped for a loss? 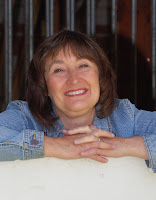 Thanks so much for having me here today!

I have to say I truly enjoyed Fourth & Goal...the characters were great...I felt like they were people I could meet at the grocery store...ok more likely the sports bar....I cried a lil, laughed alot, wanted to punch things some...then i cried even more (happy & sad tears) loved it!! can not wait for Tyler's story

I've got the book and it's next on my list to read. Yay! I already know from The Gift Horse that I love your stories, Jami. But after Chele's comment above, I'm even more fired up to read this story. Congratulations on the new release!

Thanks, Chele and Laurie.

Hey, first time I've seen this picture of you. Really a good one.

Fourth and Goal is so much more than about football. Like I said before I don't watch it but not knowing anything about it doesn't detract from a great story. But then I'm a big Susan Elizabeth Phillip fan too.

Thanks Lavada. I'm anxious to finish Tyler's story, too. He is so much fun to write.

Janette, Thanks for stopping by. I appreciate all the support.