What I did on my summer vacation
by
Cassandra Carr

What else did I do? Some pretty entertaining things, like taking my 3yo to a butterfly conservatory. Both she and my hubs wore yellow shirts -- the preferred color of the butterflies, but my daughter also had her long hair in a ponytail, which flitted about her back and scared any butterflies away that were considering landing. 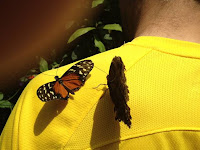 My husband, however, seemed to be a huge shining beacon for the little devils, and constantly had 2-3 on him, as you can see from the picture where two are clinging to his shoulder. 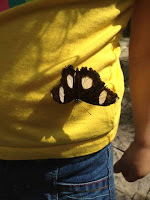 The other is a butterfly that obligingly stayed on my daughter's hip long enough for us to take the picture. We also took our daughter to both sides of Niagara Falls -- we live in the Western New York area, so it's not far, as well as on several other little day trips.

All those things might sound boring to some, but although many people cart their children all over the world, hubs and I have some...different attitudes about travel. Though he enjoys BEING places, he doesn't enjoy GETTING places, so we don't go far from home. In a few years we'll probably take her to Disney, but not until she can walk by herself for longer than she can now. ;-)

Plus there's the matter of my schedule. You know, the writing. You people keep me busy, but I wouldn't have it any other way!

Posted by Long and Short Reviews at 10:00 AM

I love butterflies, I have butterfly stuff all over my house from magnets to notepads. They are beautiful and they don't bite. lol
Kit3247(at)aol(dot)com

I haven't seen a butterfly conservatory in years! Sigh, I hope there's no NHL lockout (again)...you probably have junior and college teams to pick up the slack out East, but over here it's a little rougher. Can't wait to read the Buffalo Intimidators series!

That sounds like a fun outing going to the butterfuly conservatory, to be able to see them so close.

We went to a butterfly conservatory at MSU. It was amazing. I have also been to Niagara Falls and that is amazing in a different way.
debby236 at gmail dot com

I love butterflies. I have a butterfly tattoo on my right leg. :) We went to the aquarium this summer. It was fun. My nieces and nephew loved it.

I have never been to a butterfly conservatory.But this past couple of weeks we have been swarmed with monarch butterflies.No one knows why.
I with your hubby hate Getting to places,so I tend to stick close to home.
elaing8(at)netscape(dot)net

Thanks for all the comments everybody! Fighting a migraine so I haven't been online much but I appreciate y'all coming out!

Seeing the butterflies on the shoulder made me think of my trip to MI this summer. While I was visiting with my daughter and her husband, they brought out a plastic box that had leaves inside. Dave opened the box and showed me small, green Polyphemus moth (the non-latin name escapes me right now) caterpillars happily munching away on the leaves. He said he got them from a friend when they were no bigger than a grain of rice. They were about 1.5 inches in length when I saw them in mid-July. On his FB page, he said he placed them outside in the same tree where he got the leaves they were eating. He said it was time for them to spin their cocoons....which they did. Now, I'm waiting to see pictures of the cocoons and hopefully the moths that will come from them. It should be interesting. Dave is a nature photographer so he will be sure to get excellent photographs of the progress.

I, too, love butterflies! Wonderful pics. :)
I agree with your husband on the not enjoying getting to places. My little one is 2 1/2 and before he was 1, I took him on 2 different trips that were over 10 hours away apiece. Needless to say, he would not get into a car for more than 20 minutes for several months afterwards.
We are supposed to go to New Orleans in October, so I am hoping he is okay to drive (about 12-16 hours away) because hubby doesn't want him to fly yet. Lol. I hope you enjoy the rest of your summer and thanks for sharing with us.
trb0917 at gmail.com

Karen and Tina - thanks for commenting. Karen - that's so cool! I'd love to raise little butterfly babies!
Tina - we flew to Norfolk VA last fall with my daughter, who was a little less than 3, and it was fine. I recommend toys and snacks. ;-)

Thanks, Cassandra. :)
I took my older son on a plane for the first time when he was 3 and he was okay, but my hubby is a little silly about the youngest.
Thank you for the advice though.