Wait, wait, wait – hold it! Where did summer go? Someone must have conked me on the head because you know I just don't believe it's over! Say it isn't true!!! :-)

Ahh…well, big sigh. I guess it's true and really, as a writer, I shouldn’t complain.

This summer I finished a complete manuscript for my Love's Command series. Woohoo! I also -- yes, I do more than sit in front of a computer and write! – had a nice relaxing summer.

This year was my first year in a new home. Around ten miles from where I live now is a great river (in my opinion it's only great if you can see the bottom!) to swim around in. I spent the majority of my free time there, paddling around in the water being lazy and enjoying the warmth. I live in Vermont, so I tried to soak enough up for later on when it's freezing cold and snowy! I might have accomplished that to some degree, but I know I sure did have a wonderful time.

I didn't do the American Vacation. Meaning, Disney, a cruise, or camping, traveling to relatives, and so on. I wanted to, but then after the move, I also didn't want to! So, all in all a very low key, relaxing summer with plenty of time to write and since I'm also a teacher, set up new learning centers for my students. I think I might have done more writing in the beginning of the summer than the end, but I had a fabulous time either way.

For me, it was the perfect summer – other than the fact that it's over-- how about you all? Any fun, sun and more fun?? 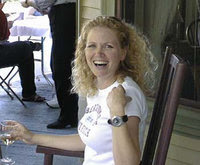 Billi Jean has been writing since high school when she couldn't wait for Robert Jordon to write his Wheel of Time series faster. She writes paranormal, contemporary and historical romance.

Her first book, Midnight Star, has won numerous awards and was voted Best Book by Long and Short Reviews. Her next installment in the Sisters of the Moon series, Silver's Chance, has done equally well.

Next up is a new spin in this world of immortals called a trio of stories --Shades of Jade. A Spartan's Kiss will be the first in this new series.

She's also started a new contemporary romance series, Love's Command, with the first book, Running Scared now available in electronic and paper copy. For more information on what's coming up in her series, friend her on Goodreads, or follow her blog for snippets of her upcoming stories.

When a woman running scared runs into the arms of a sexy cowboy, she might lose her fear, but will she also lose her heart?

When a woman on the run hits a town right out of the Wild West, the first cowboy she meets sets his sights on her. Alone, scared, and starting over, Susan will have to decide if the big, bad Russell Ryland, retired Navy SEAL, now rancher, is for real or just using up his down time between missions.

Russell takes one look at the smiling, blue-eyed beauty and realises there's a heck of a lot more after retirement than he'd thought. As he begins to dream of a life with Susan, he fights an unfamiliar battle within himself-doubt. Does she want him, or is she merely out for some fun?

Time for the reluctant couple nearly runs out when the very men Susan is hiding from come to call. Will Russell wake up quickly enough to save her? Or will their doubts get them both killed?

Posted by Long and Short Reviews at 4:00 AM

Great interview. I enjoyed reading about it and your book. I have added it to my list.
debby236 at gmail dot com

Thank you Debby! I hope you enjoy it. The sequel, Safe in his Arms, is sitting on my desktop now mellowing before I give it one more read through! :)